In his own studio (Even/Odd studios) in the Volkshotel he writes songs, rehearses and records. His own songs as well as those of others.

As a guitarist he graduated from the Herman Brood Academy in Utrecht. With about 300 gigs behind him and working as a Stage Manager at Amsterdam’s pop venue Melkweg, Sean Gascoigne is mainly active under his own name and also plays with acts such as: Abel Naturlich, Lewin, Bram Van Langen, Holymen etc.

Courses by this teacher: 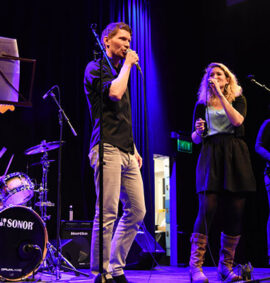 Popbands
Jordy Sanger, Sean Gascoigne
View more
Search
X
We use cookies to ensure that we give you the best experience on our website. By continuing to browse this website, or by clicking "Ok" you consent to the use of cookies. Read more information in CREA’s privacy statement.Ok