Timon is a versatile guitarist with a penchant for improvisation and writing songs. At the age of 7 he started playing acoustic guitar, but was really captivated by the instrument when he made the switch to the electric version. After his conservatory period in Utrecht and Amsterdam he played in the trio Kapok. Kapok toured at home and abroad, with highlights including North Sea Jazz and Into The Great Wide Open, and winning the Dutch Jazz Competition 2012, as well as an Edison in 2014.

Since 2009 Timon has been giving private guitar lessons to all ages at music schools and cultural institutions, and at CREA he started in 2015. Currently Timon writes songs as a solo guitarist and in January his first EP as a solo guitarist was released. 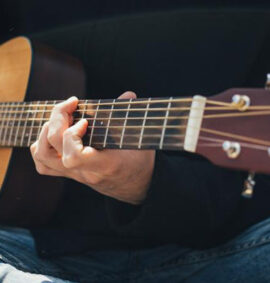